Grant opted for a rebrand after the pandemic started to slow, as the Craft Wizards brand and Crafting With Cocktails felt limiting in many ways.

The Craft Wizards was a drunken revelation during the middle of filming the Jack Frost Cosplay episode of Crafting With Cocktails (Filmed in 2015, released in 2017). I realized that because of my obsession with the Wizarding World and that shared enjoyment with most of my viewers, we could all be Craft Wizards together and craft some magical, if not bizarre things.

This site is here for many reasons. I wanted a place for everyone who sees the crafting videos to have a place to find out more about how these things are actually made. I plan to go into a lot more detail with diagrams and all of how I make a lot of the things I craft. There are also opportunities to support Grant, Crafting With Cocktails, and The Craft Wizards through Patreon and Twitch. 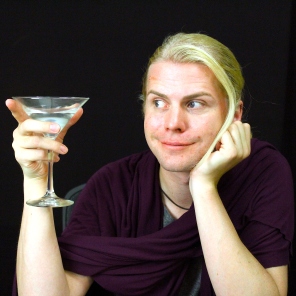 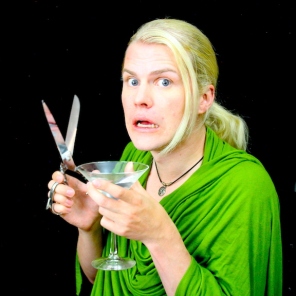 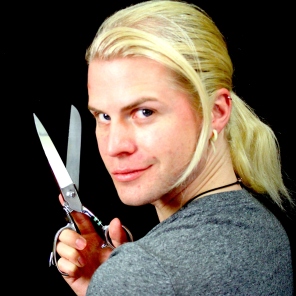 Grant is a native of Denver, Colorado who has been making art and messes since infancy. They have two degrees from the University of Colorado in Boulder, one in Business Administration with an emphasis in Marketing (somewhat surprising) and another in Theatre in Costume Construction and Design (not at all surprising). They began making their own clothes when they were in high school because they were tall, slender, and sad like Charlie Brown’s Christmas tree and could never find any clothes that fit properly.

Their first garment was made in elementary school. It was a very sad but adorable attempt at a leopard print vest via Ferris Bueller. It was one of many reasons Grant grew up constantly bullied but never wavering in their unique choices in fashion or any other damn thing. They started making their own pants at the age of 15 and started working at the Colorado Renaissance Festival at the age of 16, where their fashion choices only got more eccentric. By the time Grant went to college, they only wore pants that they had made themself (which still stands true today).

Throughout their days at University, Grant worked and studied in the Theatre’s costume shop learning the technical pieces of sewing, pattern making, millinery (hat-making), painting, dying, mold making, wig making/styling, makeup, prosthetics, and enjoying an adult beverage while doing all of the above (NEVER on the clock, of course. Never do that). They also worked at Michaels Arts and Crafts just in case they ran out of new hobbies in the theatre department. Naturally, this is where they truly started crafting with cocktails, though it would only become a show in 2011.

At present Grant works as a Program Lead at a nonprofit doing sexual health education and social event coordination as their full-time position. In the evenings they are an entertainer hosting Forbidden Bingo at pubs around the Denver area. In their free time, they enjoy making Crafting With Cocktails videos, plotting out their week in a bullet journal, and planning their birthday parties in May even though that isn’t until October.

Crafting With Cocktails: A History

I created Crafting With Cocktails (CWC) in the Spring/Summer of 2011 because making costumes and various other things while having a drink with friends had been a pastime of mine since I turned 21. Crafting With Cocktails’ debut was on September 19, 2011, and was edited on an iPad over a grueling period of time.

The idea was to make crafting more feasible for those who had never tried it. “If they can do it after drinking a bottle of wine, maybe I can do it too!” …though hopefully, no one is trying to sew for the first time while sh*tfaced… After I started talking about CWC to some friends they were all about trying it out and it became a big part of my social life. It was great fun without worrying about making mistakes or even something that you actually wanted to keep. It was also a lot of work to make the videos. I hardly had any subscribers, rarely did anyone comment and I was spending a lot of time editing through the drunken banter of me and my friends.

Then the Hello! Harto tour was announced. Then I was picked to be a part of it. 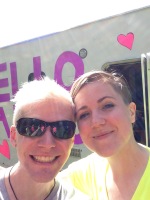 That’s when I decided to implement a lot of new ideas to my channel and start-up Season 2. I knew that if I were to host Hannah in my kitchen for her show, I’d have to make my show a little more presentable before being a part of it. In the summer of 2013, I was featured on Hannah Hart’s My Drunk Kitchen and she was gracious enough to be on Crafting With Cocktails. She and her team were hilarious and a delight to have around. I was included in their events while they were in Denver including the Denver Pride Parade since they just happened to be here that weekend.

A week and a half after we filmed the MDK, it was posted and I suddenly had over 1000 subscribers. That still blows my mind. It was my big break, as they say. After that, I was more confident about posting weekly, putting lots of energy into the show, and attending my first VidCon. I met so many amazing people through Vidcon, thus my channel and passion grew.

In 2014 things were going so well that I decided to really intensify CWC by introducing Season 3. I wanted to post 1-2 videos a week and do a different theme every month with an intricate intro to every video on top of starting a daily vlog channel, AbsolutelyGrant. Season 3 went live in February 2014 and I kept up with everything for nearly four months.

By the time Vidcon 2014 rolled around, I had completely burnt myself out. I was still gaining subscribers, though I was putting over 40 hours of work into making videos a week on top of my full-time job and doing some side projects. I was barely sleeping, my friends were starting to worry about me. Vidcon was less enchanting in 2014. Everything seemed to revolve around views and subscribers and collabs and I wasn’t having as much fun anymore. I started to lose my grip on posting weekly and shifted focus to daily vlogging and reconnecting with the people who made CWC fun in the first place, including my newer online friends.

After the shift in the time I spent editing, I was a lot happier in my day to day but felt like a huge part of me was missing. I was still daily vlogging and making the less occasional CWC, but felt like I had completely drifted away from everything I had worked so hard to create. I kept up with posting now and then throughout 2015 and hardly posted anything in 2016.

I missed Crafting With Cocktails like you miss your first love. I decided to start retooling how I could make it a part of my life again and make it sustainable. In the spring of 2017, I started editing videos with the goal of having several completed before posting even one so I wouldn’t be quite as overwhelmed between editing and work. I also had my tonsils removed which made finding time to edit both easy and drug-induced. The break gave me the opportunity to be creative again like I hadn’t been in a long time.

And here we are. Crafting With Cocktails is now the founding piece of The Craft Wizards.